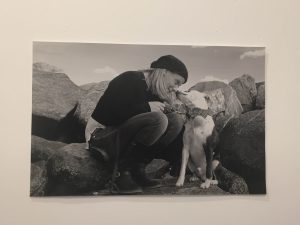 One of the photographs from “The Body Images” by Lauren Murphy ’17. Alicia Phaneuf/The Mirror

Having confidence in one’s body image is exceedingly difficult, especially for young women. Art major Lauren Murphy ‘17 addresses this issue through her inspiring capstone project entitled, “The Body Images.” By showcasing eight women who have all experienced some form of eating disorder, Murphy allows audience members to gain awareness of these mental health issues through the personal narratives of these women.

Murphy’s project has two parts that showcase the experiences of the women in different ways. The first part of the exhibit is housed in the Lukacs Gallery in Loyola Hall and displays 16 black and white photos, two for each of the eight models. Murphy explained that the photos were meant to show each woman where and how they felt the most confident and beautiful.

Sophomore Natalia Maccio commented on how the photographs affected her perspective of these women.

“I thought it was really cool that the pictures were taken in black and white because it made them more powerful,” said Maccio. “You could really focus on the features of each woman and see how much confidence they gained since overcoming a challenging time in their life.”

Next to the Lukacs Gallery is the Experimental Gallery, where the second part of Murphy’s project is housed. The video includes portions dedicated to the words of a clinical psychologist who specializes in eating and weight disorders. Weaved between the spoken passages of the specialist are personal accounts of each model. In the video, each woman tells her own story and experience regarding eating disorders.

Murphy explained why she chose to incorporate the two different aspects within her project.

“I knew that I wanted to do the photographs because that’s what I’m comfortable with; I’m a photographer and I enjoy doing photographs,” said Murphy. “But I also wanted to add the video component because I feel like it’s a more effective way to showcase these stories.”

“I wanted to separate the photographs from the video because I feel like the video is just a very special experience of its own,” added Murphy.

Student observers were infatuated with Murphy’s exhibition and the display of the eight models.

Senior Katelyn Merz said, “I thought this exhibition was really eye-opening. I really liked the video part of it because you can see the people’s happiness in the pictures and then the video tells the story of how they got to that point.”

“I think this exhibition is so inspiring and it’s emotional to see these girls who had such a hard past be as happy as they are in the pictures,” said Miller.

Investing more than six months of her time into the project, Murphy’s exhibition displays the passion and dedication that she utilized throughout the experience.

Studio Art Professor Suzanne Chamlin explained, “Lauren was very instrumental in directing herself throughout the project. It’s really heartening how engaged she is with the healing process with women who have struggled with eating disorders and I love the connection between the power of art, expression and healing.”

Murphy hopes that the exhibition will promote awareness of disordered eating, eating disorders and mental health problems as a whole. She also emphasized, “If someone is going through the same kind of experiences as these models, I hope that they can see this project and realize that they’re not alone and so many people struggle with the same kind of things.”