“Sensitivity,” a new student art exhibition, premiered at Fairfield on March 15. Created by Lauren Murphy ‘17, the exhibition opened up in coordination with Fairfield’s Studio Art program. It is meant to be a culmination of her work for her capstone class. 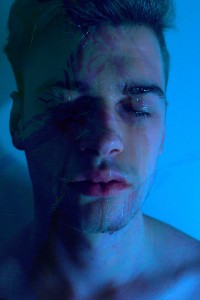 Murphy, both a studio art and art history major at Fairfield, has gradually crafted “Sensitivity” over the past year.

“Sensitivity” is comprised of five different series of photos taken by Murphy, which focus on the elements of expression and emotion as they appear on the human body.

“I have a very deep meaning behind all of the art that I do,” said Murphy.

However, according to Murphy, the meaning is up to the interpretation of viewers. Though the one thing she does want viewers to take away from her exhibit is emotion.

The exhibition opened with a small reception at the beginning, with family and friends in attendance for the show. The Lukacs Gallery, located in the basement of Loyola Hall, was set up to have each series of photographs displayed independently on separate walls around the room. This creates a stark setup that simultaneously overwhelms viewers while inviting them to take a closer look.

When asked about how she created “Sensitivity,” Murphy shed some light on her process.

According to Murphy, the shoot itself is a relatively straightforward process as she is able to take a large amount of photos quickly during this time. The editing process is a different story though.

“I usually have hundreds or thousands of photos from one session,” said Murphy.

She then goes through all of them and takes the five best to go through Photoshop in order to work with the lighting and color.

For Murphy, inspiration struck last summer when the idea for her first series popped into her head. After a little bit of experimentation with photography, she began to see her vision for the exhibition. Using two different models to be the subjects of the photos, Murphy continued to set up her own photoshoots over the past year and progressively built the the “Sensitivity” series with each new shoot.

Mary-Beth Roche, one of the non-student visitors at the gallery opening, gave her thoughts on the exhibit’s contents.

Roche noted that the photographs immediately struck her with a sense of moodiness and lauded the effects used in the photos.

When asked if she has any other projects that she is working on, Murphy revealed that while she has no other major projects in development, she is still planning to do more photoshoots in the near future. “Sensitivity” is expected to run from March 15 to March 22 in the Lukacs Gallery.