Summer break is in full swing and that means so are summer concerts. Ariana Grande’s Dangerous Woman tour appeared as one of the “must see” concerts of the season. The tour began in February of this year, where many of our fellow stags attended her NYC performance at Madison Square Garden. This national tour eventually found itself in Manchester, England on May 22 where an explosion brought an abrupt ending to the night. According to NBC News, 22 concert attendees were killed, in addition to approximately 59 people injured in the suicide bomb attack.

Famous artists from across the world — including Justin Bieber, Katy Perry, Miley Cyrus, Black Eyed Peas, Pharrell Williams, Coldplay and many others — flew to Manchester to take part in this special performance. Although apprehensive as to whether or not people would attend the concert due to the recent terrorist attacks, fans did not let the pop stars down. According to METRO, tickets were sold out for the concert in under six minutes. About 50,000 people attended One Love Manchester. 14,000 of those tickets were reserved for people who had attended Grande’s Dangerous Woman concert in Manchester. If you were not one of the fans in Manchester, the concert was broadcasted live on numerous platforms including YouTube, Facebook, Freeform 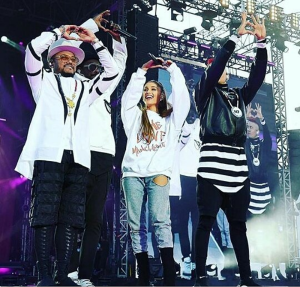 Grande opened the concert with her song, “Be Alright.” The performance began with her and her backup dancers holding hands across the stage, setting the tone for a positive and unifying night of performances. Later on, Grande was joined by the Black Eyed Peas to sing a heartfelt rendition of “Where is the Love.” The strength of the lyrics seemed to reach the hearts of audience members, because during the lyrics, “Father, Father, Father help us, send some guidance from above, ’cause people got me, got me questionin’,  where is the love?” people began to form peace signs and hearts with their hands.

One of the most beautiful moments of the night was when Grande invited Parrs Wood High School of Manchester to sing, “My Everything.” The group featured a few survivors of the Manchester attack and when the young female lead singer of the group began to cry, Grande comforted her while onstage. Singing with this group of students showed Grande’s dedication to helping this community and allowing people of all backgrounds to come together and enjoy a night of music and love. “The kind of love and unity that you’re displaying is the medicine that the world needs right now,” said Grande. “I want to thank you for coming, I love you so much.”

Miley Cyrus also made a memorable appearance at the concert. She began with a solo, “Inspired,” which moved the audience to tears and later returned to sing a beautifully executed duet, “Don’t Dream It’s Over,” with Grande.

“Thank you from the bottom of our hearts for having all of us,” said Cyrus. “I am so honored to be at this incredible event surrounded by all you amazing people. And for me the most important responsibility we have on this entire planet is to take care of one another — and look what we’re doing right here.” 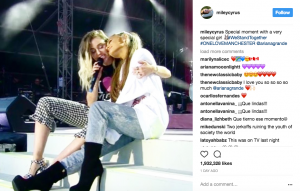 Katy Perry did not come with a somber attitude, rather the opposite. She took the stage in complete confidence, which signified the evening’s essence of fighting for what’s right — fighting for love. “Love conquers fear and love conquers hate. And this love that you choose will give you strength and it’s our greatest power,” said Perry.

Perry began with an acoustic rendition of “Part of Me,” which when sung in a more slowed-down tempo allows the audience to hear the messages of strength and self love. Following this song, Perry continued with her infamous song “Roar.” Not many people thought Perry could “out-do” her performance of this song from the 2015 Super Bowl halftime show, yet that was proven wrong at the concert. Perry shed her fur jacket at the start of the song to reveal a white bodycon dress with black lace embellishments. She danced around the stage in such confidence that revealed her courage, strength and willingness to fight for love. Her ending note for “Roar” was a force to be reckoned with, as she hung onto the note for as long as she could in a way that caused the cheering audience to be silent until the end of the song, later resulting in the crowd chanting “Manchester.” 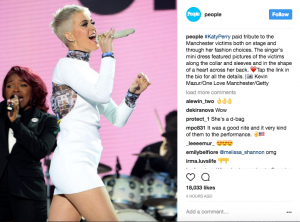 A heartfelt video was displayed toward the end of the evening which showcased many famous artists who could not be in attendance at the concert, but still wanted to show their support for Manchester. Celebrities included: Halsey, Bastille, Dua Lipa, Sean Paul, Jennifer Hudson, Kendall Jenner, Kings of Leon, Sam Smith, The Chainsmokers, Rita Ora, 21 Pilots, Demi Lovato and Sir Paul McCartney. Each of these celebrities gave their love to Manchester and concluded their frame by saying, “We stand with Manchester.”

Later in the night, Coldplay took the stage and had the audience in complete silence. They started their performance with a rendition of, “Sit Down” by the English band James which then segued into “Fix You.” The song says, “When the tears come streaming down your face, when you lose something you can’t replace, when you love someone but it goes to waste, could it be worse? Lights will guide you home, and ignite your bones, and I will try to fix you.” At these words, the mesmerized audience took out their cell phones and lit up the stadium in a tribute to the ones affected by the attack. Wanting to brighten up the mood of the audience, Coldplay finished their performance with “Viva La Vida” and “Something Just Like This.” These songs were accompanied by colorful lights and a rainbow of confetti to produce a truly showstopping segment of the concert.

At the conclusion of the concert, all performers re-joined Grande to sing “One Last Time.” Once again, the performers cleared the stage and Grande sang one last solo, “Somewhere over the Rainbow,” which once again brought the audience to tears. Though the night was filled with top hit songs, confetti and an energetic group of pop stars, the overall somber essence of the evening lingered. Tribute to the victims of the Manchester attack were beautifully recognized and honored due to the rally of the community and the effort put forth by the singers to come together in a time of need.

“Evil will test us. It will show its face again. But we will be ready. We will be great. We will be fearless and we will honour our children,” said Grande’s manager, Scooter Braun. “Hatred will never win. Fear will never divide us because on this day, we stood with Manchester.”

According to NBC News, the “One Love Manchester” benefit concert generated about $3.49 million over a three-hour period, contributing to the $9 million raised prior to the performance, which combines to a total of nearly $13 million. All proceeds will assist in the financial difficulties of those affected by the May 22 attack.