After half a semester of construction on campus, students have become accustomed to the sounds of trucks backing up, the sights of metal beams being hoisted into the air and the smells of cement being poured into ditches. While the campus may seem to be in an endless cycle of construction, the payoff to taking detours to class will conclude shortly for the most part.

After spring break, there were three new additions to the construction. Work began on the Aloysius P. Kelley Center parking garage, the new residence hall behind Gonzaga Hall and the juice bar that will soon be in the Leslie C. Quick, Jr. Recreation Complex.

“I think it’s coincidental that all this growth and this tremendous positive construction wave is happening when we’re celebrating our 75th anniversary,” said Assistant Vice President of Student Affairs Jim Fitzpatrick ‘70.

Some, like Nick Ragonesi ‘17, believe that having so much construction at once is impractical.

“I think in the long run, it will be a positive thing for the University, but I think there’s too much going on at once, especially with the [Marion Peckham Egan] School of Nursing [and Health Studies], the new dining hall, the parking garage and the new dorm,” said Ragonesi.

The Kelley Center parking garage has an estimated completion date of spring 2018, according to Dean of Students Karen Donoghue ‘03. Fitzpatrick said that the new residence hall is estimated to have a fall 2018 completion, while the RecPlex juice bar is supposed to be operational by mid-April of 2017, as reported by Director of Recreation John Paladino.

Paladino spoke of the benefits of having a juice bar at the RecPlex.

“I think it will help students with their planning of their workouts,” he said. He went on to explain that students can grab something quick to eat after exercising if they have to run to class or to a meeting right after. He described it as a “convenient way to get a nutritional message across.”

The juice bar’s menu will include smoothies, energy drinks, water, cereal, yogurt and coffee and other healthy options for snacking. In addition to the juice bar, a sound system will be added to the lobby area and the main level strength and conditioning area.

“We’ve been very fortunate this winter because I don’t think the weather has impacted the progress in the plans,” added Fitzpatrick. According to Fitzpatrick, this completion of the school of nursing is on track for fall 2017.

“When you think of what’s happening with our nursing program, it’s one of the stars of our academic crown so to speak, and to be able to provide such a tremendous facility to a program that already is one of the best in the country I think speaks volumes as to what we’re trying to do to continue to elevate the academic offerings that are here at Fairfield,” said Fitzpatrick. 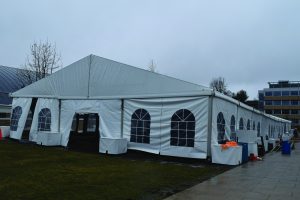 He also emphasized his excitement to see the new dining hall, specifically the new pizza oven station. The dining hall is supposed to be completed by August 15.

All these advancements also come with some challenges.

One of the difficult aspects explained by Fitzpatrick was the closure of the dining hall on April 13 and the opening of the tent on April 17 located on the Barone Campus Center green due to construction. The tent will be open until the end of the semester and through the summer.

“That was a very difficult decision to make, but it was one that we felt that we had to make and all the input I received and all the people we checked with felt that it would be better to go with the tent in the spring … to guarantee that the Barone dining project and the Tully Commons would be completed in September rather than to roll the dice and take a chance and having to put up the tent in August, September and possibly October,” said Fitzpatrick.

Donoghue reported that Fitzpatrick is trying to improve the experience of eating in a tent by having a different food truck in addition to the regular serving station every night of the week.

Another issue Fitzpatrick touched upon is the fact that over 100 parking spots were lost due to all the construction. He spoke about measures taken to soften the effect of this unfortunate consequence, such as the on-campus shuttle and the parking lot across from Campion Hall. However, he still described the spots which were lost as “prime real estate.”

Freshman Hannah Ferreira commented on the difficulties resulting from construction.

“I think that the end result will be awesome, but it’s definitely getting in the way of getting to class and you have to go around and it’s kind of an obstacle,” said Ferreira. “I’m a little concerned about the tent that we are going to have to eat under because of the weather.”

Freshman Christina Bogacz reflected on both the positive and the negative aspects of construction.

“At first [construction] didn’t bother me that much and then as the whole BCC and Barone has built up more it’s become a little bit more of an annoyance. I’m a little worried about the whole tent situation and how eating is going to go,” Bogacz said. “But it’s something that just has to happen. It’ll be good for next year.”