While more than 500 students visited the Career & Internship Fair on Feb. 26, many feel the event has room to grow for next year.

Director of the Career Planning Center Cathleen Borgman ‘80 said the event was overall a success, with 117 potential employers in attendance.

“I’ve spoken to a few people who are happy [with the Career Fair],” she said, “but some of the counselors have actually heard from a few students who have gotten interviews and offers.”

According to the 2014 First Destination Report from the CPC, 39.4 percent of seniors get their jobs from campus 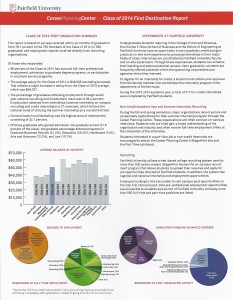 recruiting and the Career Fair.

Senior Amanda Dentico, a management major, is one student who found the event especially helpful.

“[I] got a lot of business cards and had a few really good conversations that might lead to interviews,” she stated.

One of the most successful aspects of the event was the amount of alumni recruiters present.

“It’s also a great marketing technique on the part of the companies because they will oftentimes try to get alumni who graduated recently so that they can give you a firsthand account of what it’s like to work within an organization,” Borgman said. When it comes to the benefits for students, alumni and employers alike, “It’s kind of a win for all three groups.”

Senior Taylor Morgan, a psychology major, attended the Career Fair and said she thought it was valuable networking practice.

“Even though I felt a little nervous and that a lot of companies weren’t looking specifically for psychology majors, Stephanie Gallo … at the Career Planning office came up to me and encouraged me to introduce myself to some companies I never would have intended to,” she stated. “I think it was a positive experience that will influence how I continue to explore post-graduation employment.”

Dentico agreed. “For a senior, it was a great networking opportunity and a chance to get our resumes out to firms that are currently recruiting,” she stated.

However, not all students who attended the event were satisfied. Morgan, while she said the event was useful for practice, said she wished the event had more opportunities for her.

“I didn’t find any prospective career leads,” she stated. “After I had a company tell me that I seemed really nice but they didn’t have anything for me, I became a little discouraged.”

Agreeing with Morgan on the lack of opportunities for non-business majors, Elizabeth Duffy ‘15 ended up not going to the Career Fair.

“I went back and forth deciding whether or not I was going to go, then I ultimately decided it wasn’t going to help me,” said Duffy, an English major. “It didn’t seem like there were any opportunities for me there.”

Borgman acknowledged this reputation, but said that students aren’t looking hard enough at the companies that attend.

With that, Borgman admitted that more work can be done. “Well, we’re constantly in search of a more diverse group of companies. More opportunities for the English majors, the science majors.”

According to Borgman, the CPC has already started brainstorming ways to make the Career Fair more focused for arts and sciences majors for next year.

“I’m trying to research the possibilities of a science [Career Fair], so people who are interested in chemistry and biology would get some employers,” she said. “That would be focusing on a group of students who really feels underrepresented.”

“If there was a resource for each major at the career fair that could say, ‘hey, here are five companies that may have something for x major,’ rather than that really big overwhelming information packet,” she stated.

One way the CPC attempts to provide more resources is through the Stags4Hire website, a job and internship database updated daily with new listings. Students can register accounts with Stags4Hire and upload their resumes, contact potential employers and apply for positions through the site.

Borgman stressed the importance of using Stags4Hire in tandem with the Career Fair.

“Make sure if [the company is] on Stags4Hire, you apply, because a lot of people meet various individuals at the Career Fair, but then they don’t apply,” so recruiters think students are not actually interested in the company, Borgman said. “So if people don’t know how to [apply], they should get in touch with us and we’ll walk them through the whole process.”

Both Morgan and Dentico have used Stags4Hire to land their current internships.

Dentico said the process was as simple as uploading her resume.

“I put my resume on Stags4Hire, and one of the university recruiters contacted me,” she stated.

“I check the website on a fairly regular basis,” she stated. “It seems there’s a lot of internship opportunities now that I’m looking for full-time employment, but I’m optimistic that as it gets closer to May, more opportunities will be posted that apply to recent grads.”

According to the First Destination Report, under 30 percent of students became employed through an internship. Borgman said many of these students probably got their internships through the CPC, but that number could be higher if students start taking the Career Fair seriously.

“Some schools have a culture; it’s the Career Fair, it’s the Career Fair, and everyone talks about it. Everybody gets excited and gets behind it, and that’s what our goal is,” Borgman said. “We want to be like those other schools, where the students are taking it seriously, they really prepare and do their due diligence.”