Hannah-Jones is a writer at The New York Times Magazine and the creator of The 1619 Project, a multimedia study of the effects of slavery on the foundations of modern society. She was named a MacArthur Genius 2017 for her work investigating education reform, and is a cofounder of the Ida B. Wells Society for Investigative Reporting, which supports and helps to grow the number of reporters of color. Hannah-Jones’ work has been featured in The Atlantic, The Huffington Post and Politico Magazine. Her first book, to be released later this year, is called “The Problem We All Live With” and details current segregation in education. The Mirror was fortunate to be included in both a group discussion with Hannah-Jones alongside other students and to have time to personally interview her before her speech.

The 1619 Project began as an initial fascination on Hannah-Jones’ part about the significance of the year 1619 and its absence from traditional history lessons. Every child grows up learning about the Mayflower and the Pilgrims, she remarked, but no one learns about the White Lion and the 20 to 30 enslaved people that ship brought to Virginia in 1619. That gap in history is what spurred her towards taking over an issue of The New York Times Magazine in August of 2019 to mark the 400th anniversary of the ship’s arrival, and to reimagine the origins of American history. The project is presented not only in print but through multiple forms of media, including podcasts, videos and written articles, all of which center around this significant anniversary.

“The 1619 Project is American history, and we are centering slavery,” Hannah-Jones said. “I believe we are moving the people who have been treated as marginal to their rightful place in the center of who we are as a country. But this is not a project on [just] black history.”

More than anything, Hannah-Jones aimed for The 1619 Project to showcase the history of black Americans as a living legacy, one that has a place in modern-day America.

“If you read the project…every essay starts in the present, because I wanted to answer that question that every black American gets, which is, ‘slavery was a long time ago, why don’t you just get over it?’” Hannah-Jones said.  “Well, I’m going to show you, through all of these essays, that we have not gotten over it and you can look at all these areas of American life right now and explain these inequalities, explain our culture, explain our politics, by tracing them back to the legacy of slavery.”

She stated that the only way to process the trauma of this history is to acknowledge and learn more about it.

She also spoke to the importance of broadening the narrative of the history that we are taught and questioning why we consider some aspects of that narrative more significant than others. 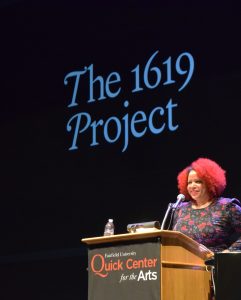 “If the Declaration [of Independence] still matters, then certainly the fact that Thomas Jefferson owned 130 people when he wrote that Declaration still matters,” she stated, directly speaking to the complicated nature of many of the venerated historical figures that played a part in African-American subjugation.

There has been a backlash to the project, with certain historians and other critics calling it harsh and pessimistic.

When asked about this criticism, she accepted it, saying, “We knew we were making a provocative argument that would unsettle people.”

This was something that she believed had to be done, and even though it has faced public backlash, she stated that there is nothing about the project she regrets.

Following her convocation speech, Hannah-Jones joined a panel of current students, faculty and alumni to answer their questions and others from audience members. Alongside Hannah-Jones was assistant professor of history Sunil Purushotham, PhD, who moderated the panel, Dayanna Mazo ‘20, Candace Peterkin ‘20 and recent alum Alec Lurie ‘19, who worked with the late Vincent Rosivach, PhD, on an ongoing project to document slaves that once lived in Fairfield.

A central question posed to Hannah-Jones both by The Mirror and Peterkin were about activism, and whether she considers her work as a journalist something that makes her an activist.

“I’m not an activist, except in the tradition that all journalists are activists,” she responded. She went on to further emphasize the important role journalists play in the United States, voicing her thoughts on the idea of ‘objective journalism.’

“Our job is to hold powerful people accountable and to speak on behalf of the vulnerable. That to me is activism, and when people say journalists aren’t activists, I say that none of those positions are neutral positions,” she said. “I think that belief in objectivity is a white normative belief that is not true, and that there is no such thing as objective journalists.”

Hannah-Jones also had comments to make on the United States’ upcoming election, bringing up statistics from the 2016 election that highlighted African-American voters, women specifically, who decided not to cast their votes for President Donald J. Trump.

Her presented data highlighted black women as the population most devoted to serving the community and caring for their fellow Americans, who were interested in bettering their neighborhoods rather than just bettering their own situations. This, Hannah-Jones stated, is what best serves the dream of Dr. King, who she believes ultimately wished for black Americans to be able to take part in Thomas Jefferson’s ideals of “life, liberty and the pursuit of happiness.” In basic terms, Dr. King’s vision was for African-Americans to receive access to the rights that every American is entitled to.

“If we want to believe in King’s dream, we need to do one thing to bring it to fruition, and that is trust black women,” she said, referring to herself as laughter and applause followed. “Especially this one.”