Sexual, physical and mental assault are all part of the long and unnerving list of human brutality. Artist Susan Crile is dedicating a three-part series to documenting this abusive behavior in hopes that people will see the destruction of what humans can do to each other. On display in the Lukacs and Experimental Space Galleries located in Loyola Hall hangs the second portion of this series: “Guantánamo and Black Sites: In Our Name.” In this exhibition, Crile includes artwork that shows men being stepped on, placed in tight boxes, drowned in a toilet, urinated on and enduring anal feeding — to name a few. These images are representations of the inhumane actions that occurred at Guantanamo Bay and Black Sites.

Sophomore Alyssa Pilkington commented on the profound message and impact of the exhibition. “Susan Crile’s exhibition was an eye-opening experience to say the least,” said Pilkington. “Her graphic depictions of the tragedies of war and torture clearly got her opinion across that these happenings are very real and very unacceptable.”

When photos of prisoners at the Abu Ghraib prison in Iraq leaked and showed men enduring sexual and physical abuse, in addition to humiliation and torture, Crile knew she wanted to make a statement through art. Though her first series, “Abu Ghraib” was inspired by the released photos of Abu Ghraib, “Guantánamo and Black Sites: In Our Name” showcases interpretive images of military brutality, which were based off of the stories and memories of prisoners. Crile explained that researching material needed to accurately depict certain prison scenes proved to be the most difficult and disturbing part of her creative process. 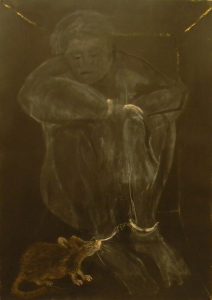 “You’re reading these testimonies of people who have been brutally abused and who somehow come out on the other side of it,” said Crile. “They’re just trying to figure out a way to re-establish a normal life and they really can’t do it.”

When one enters Crile’s exhibition, a flood of disturbing emotions such as fear, disgust and for me, nausea, overwhelms one’s mind. Looking at a piece with a man crouched in a small box with nothing but a rat for company produces a sense of claustrophobia, especially since the artwork is hung low on the wall, so that the viewer can share the prisoner’s experience. Sophomore Annie Balunas commented on her reaction from the work.

“You could almost feel the helplessness and the isolation that the prisoners felt,” said Balunas. “What I liked most about the artwork was that all of the backgrounds were sized by Susan Crile according to the environments the prisoners were in, so you really understand their situations.”

In addition to these to-scale pieces, others depicted soldiers hog-tying prisoners and urinating on them, prying their eyes open in order to spray mace inside them and cutting their genitalia, all of which provided an extreme sense of discomfort and unease.

Torturing is, “not an acceptable thing,” said Crile. “I want people to feel that and feel the sense that this is not right and that we need to have a bigger goal in life than to torture and make other people’s lives miserable.”

Pilkington also commented on the idea of torture and mentioned how Crile causes the viewer to empathize with the prisoners being represented. “While I’ve never been subject to these exact realities, the pieces in her exhibition can be related to my own life as a reminder of how to always treat others with respect and dignity — to treat people like people,” said Pilkington.

Crile continued to explain that her work is not only emotionally draining, but is also physically demanding. In order to accurately depict figures, Crile reads blogs, books and news stories on certain prisoners and then imagines the scenes. She invents different positions that prisoners and guards would assume, and then she forms her own body into those positions. For example, in her two pieces, “Solitary 39 x 39 inches” and “Five Months,” Crile’s paper uses the same dimensions as the box that the prisoner was kept in. She then shaped her body into different positions that she imagined the prisoner would have taken inside the box. This process allowed Crile to truly connect with the figures she was drawing and discover which places on the body she should show having tension and pressure.

The materials used in Crile’s exhibition add to the powerful imagery of her work. Within her pieces, Crile uses a variety of mediums such as pastel, charcoal, white chalk, clay paint (a matte paint that looks like clay) and flashe paint (a vinyl based paint that adds a brighter tone). The artistic choices she uses regarding materials is in response to the emotion and feeling Crile wants to convey. For example, in the same pieces named above, Crile uses white chalk to show the fragility of the body and the agitation the man endures while trying to find relief in the small enclosure. Further, in the piece entitled “Man Hanging,” Crile uses pastel on the feet, groin and wrists of a prisoner to accentuate places of discomfort and pain. Crile wanted to accentuate the discomfort of these prisoners so that the viewer will feel compelled to empathize. It’s often masked within society that the U.S. performed disturbing acts such as these and through her exhibition, Crile is able to document these findings and instill a new and raw sense of compassion.

“I think that empathy and caring about others and having a sense of social responsibility is one of the most important things in this day and age,” said Crile. “If people can have some sense of understanding that even if one of these people happens to be guilty — which we don’t know since no one has been charged or tried — it still is never acceptable to torture them”.

“Guantánamo and Black Sites: In Our Name” will be on display from Feb. 15 to Mar. 9. Crile is also giving a lecture entitled, “Pain and the Abuses of Power” on Wednesday, Feb. 22 in the library’s multimedia room.