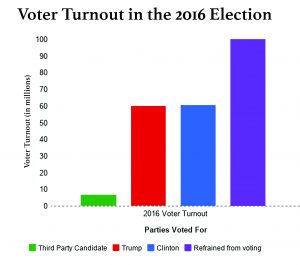 Information compiled from The Washington Post; Infographic by Lexi Thimble

In the 2016 presidential election, 60.5 million people voted for Clinton, 60 million voted for Trump, 6.2 million voted for another candidate and an overwhelming 100 million eligible voters did not vote. That’s 43 percent of eligible voters, a higher percentage than voted for any individual candidate. Imagine how much those voters could have impacted the election if they had only turned out. Even more concerning, this isn’t an exception; it’s the rule. In presidential elections from 1916 to 2016, the approximate percentage of eligible voters who did not turn out was relatively constant, around 40%. In midterm years, this goes up to 60%.

According to the Pew Research Center, the U.S. has a lower election turnout than most developed nations. This can partially be attributed to the appalling voter suppression laws found in many states which attempt to silence the voices of minorities in this country. However, while these laws are shameful and entirely contrary to the democratic ideals of our nation, they are not the only reason the U.S. has such low turnout. Unfortunately, even among the people who have no barriers between them and voting, a significant portion of the electorate, particularly young people, just choose not to vote.

There is much debate over why exactly young people vote less, but one of the reasons most often cited by young people is that they don’t feel their vote matters. This becomes a self fulfilling prophecy, because a vote never cast can’t matter. But our votes do matter. A small number of votes in a single state can have long lasting and damaging national consequences, such as in 2000, when Bush won Florida, and thus the nation, by a margin of only 537 votes. In 2017, a single vote could have decided control of the entire Virginia House of Delegates. In 2018 young people will make up a majority of eligible voters, and if we turn out in force in November, we will sway elections. FiveThirtyEight gives Democrats a four in five chance of taking the House and a one in three chance of taking the Senate, but this can only happen if we vote. A new generation of voters is rising, and, if we get out and vote, the nation and the world will hear our voice and listen to what we say.

Since Jan. 20, 2017, we have seen incredible displays of activism and outrage, often spearheaded by young Americans. We have protested, organised and spoken out. We have marched for science, for women and for our lives. We have rallied around the knowledge that this is not normal, this is not acceptable and this is not who we are. Now, we have our biggest chance yet to prove that, but in order to do so we need to register to vote, so go do it. Make sure you’re registered to vote, and if you aren’t, register. Websites like Vote.org, RockTheVote.org and VoteSaveAmerica.com can help you check your registration status and easily register to vote in minutes.

If you’re angry at a Congress that tried to take healthcare from millions of Americans, that gave a tax break to the rich and corporations and which, at time of writing, is trying to put someone credibly accused of sexual assault on the Supreme Court, all while failing to hold the president accountable — get out and vote. If you’re outraged about child internment camps, about attempts to legitimize white supremacy and about the constant lies fed to the American people — get out and vote. If you care about protecting the environment, about stopping gun violence and about standing up for human rights at home and abroad — get out and vote. Only by voting can we begin to restore the integrity and legitimacy of our republic, only by voting can we ensure that our elections are protected from hostile foreign influence and bring those responsible to justice and only by voting can we show our narcissistic, bigoted and misogynistic president that he does not represent us. So come on America, when November comes, let’s get to the ballot box and show the world who we really are.