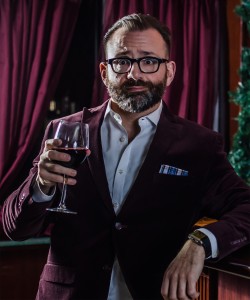 Fairfield alumnus Joe DeVito ‘90, will return to Stag Country on Wednesday, March 11, to perform at Fairfield Theatre Company’s StageOne. As an English double major and philosophy minor, DeVito never anticipated the prosperous stand-up career that would take shape as he entered his 30s.

DeVito’s hard-hitting punchlines and clever routine led to his appearance on “The Late Late Show” with Craig Ferguson on CBS, Comedy Central’s “Live at Gotham” and as a semi-finalist on season five of NBC’s “Last Comic Standing.” DeVito received a “9.5 out of 10” rating from the Montreal Gazette after performing at the prestigious Just For Laughs Festival in 2006. DeVito’s humor has also landed him as a panelist on “Chelsea Lately,” CNN’s Headline News and as a regular guest on FOX News’ Red Eye with Greg Gutfeld.

“I always liked being the funny one and lucky I had a supportive family,” said DeVito. “I had a few [funny] uncles, which meant you had to be careful sitting down at the dinner table so you didn’t choke on your food,” laughed DeVito.

DeVito’s comedy career began after a few coworkers pushed him to take a stand-up class. In fact, one of DeVito’s friends went to the class to ensure his participation. Two sessions later and a final project would propel DeVito into the stand-up world. Although DeVito had plenty of natural talent, being on stage would not come easy.

“I remember being in the bathroom throwing up before gigs in New York City. You need to get on stage over and over, but for me, the comedy club restrooms were so gross that I quickly got over it,” said DeVito.

DeVito’s organic and humble act transcends his family’s home videos to the spotlight on stage where the audience cannot resist his raw humor.

When DeVito auditioned for “Last Comic Standing” he had been performing at the time for six or seven years. During his audition in an empty club, DeVito instantly connected with the judges. He told jokes of working in an office and everyday coworker relations.

“A judge asked me, ‘Did you used to work in an office?’” said DeVito. Without hesitation DeVito responded, “Yeah! I’m on my lunch break!”

DeVito recalled why he suddenly connected with these judges opposed to the previous times he had auditioned. “I flipped through my planner and the difference was the 625 performances I had within the last year.”

“With stand-up, the only way you know how to do it is in front of an audience. I guess we are lucky with the things we don’t know because I would have psyched myself out,” said DeVito

During his time at Fairfield, DeVito, or should I say “Big Mac,”  was editor-in-chief of The Mirror his junior year in addition to his music reviews and humor writing. DeVito also performed a stand-up during a freshman orientation in the Aloysius P. Kelley Center while he was a student.

“It’s strange for me because Fairfield students coming to my show were not born while I was at the University,” said DeVito. “It would be a shame if students aren’t there to relate.”

After college, DeVito spent a decade as a journalist and as an advertising writer. As a writer, DeVito has contributed to the award-winning film “Super Size Me,” MTV and Maxim Magazine.

“Small theater shows [like StageOne] are the best. They are more intimate and are not as distracting as comedy clubs so I can take my time,” said DeVito. This organic approach makes each stand-up routine different. Although DeVito has set jokes, he will leave most of his performance open, similar to musical improvisation.

“The bands I liked growing up were the ones who didn’t have a live show that sounded exactly the record. If something cool happened that moment could not be duplicated anywhere else,” added DeVito”

Come out for a great night of stand-up, but be weary DeVito’s punchlines do not knock you off of your chair on StageOne.