With more than 4 million Syrian refugees looking for homes, the Syrian Civil War, which has led to the current refugee crisis, is just as pertinent today as it was when it began five years ago.

However, all of this struggling and pain has created one positive outcome: beautiful art. The moving works of Syrian refugees from the Za’atari Refugee Camp in Jordan will be on display in the Lukacs Gallery of Loyola Hall beginning on Feb. 10.

The works of these artists, brought over to the United States by Fairfield alumna Julianne Whittaker ‘12, will be on display until March 2. The exhibition is called “My Soul Returns Back as It Was.”

Whittaker commented that she was inspired by the artists for their resilience. 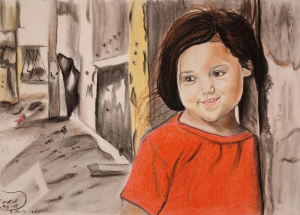 “Seeing how people who have lost so much and have faced so much trauma in their lives … still try to use their talents to give something back to the international community … that’s really inspiring.”

“The artwork is very moving,” said Rose. “Especially the depictions of families and the evocations of violence. Some of the art is abstract, while some of it is realistic. It speaks of [the artists’] experiences as refugees … It is powerful in that it is so relevant to current events.”

These artists’ stories deeply affected Whittaker, who immediately checked to see if the art could be exhibited and sold at her alma mater.

“Julie e-mailed the University to ask to exhibit the art of the refugees,” added Rose. “Professor Yarrington and I thought it would be a good cause relating to social justice issues and the university mission.” 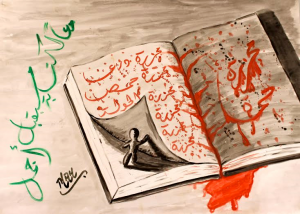 Rose was particularly touched by the fact that these artists, who lack so many basic needs, still “feel compelled to make art and express themselves through art.”

Students at Fairfield were given the opportunity to ask the artists questions, which were then sent to Whittaker who translated between the students and the artists.

When one student asked if the artists will depict happier settings if things improve in Syria, artist Mohammed Amari responded, “I am an artist attached to the events of my time, the events of the world. Right now, the world is sad. I am saddened by the situation in Syria, just as I am deeply saddened by the situation in France. As a Syrian, I am accustomed to love and peace for mankind. I hate destruction, war, blood and everyone who has abandoned the value and moral of humanity. I hope someday the situation changes, and I will change my art with it.” 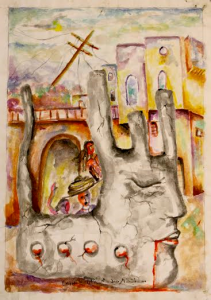 The exhibition stands out from previous exhibitions at Fairfield for being so political in nature; however, according to Yarrington, this is a focus that the studio art department would like to have more often in the future.

“This is something we want to do more of in the future … This will be a good opportunity for professors to talk about the art and the ideas behind the art that would relate to the class.”

Yarrington also commented on how the work of Susan Crile will be displayed at Fairfield in September 2016. This work, largely political, is in response to the human rights violations that occurred at Abu Ghraib prison in Iraq in 2003.

The Syrian refugee art exhibition is in partnership with Fairfield’s studio art program, the Ignatian Residential College and The Amal Foundation, a nonprofit organization that supports and assists refugees in need.

The Amal Foundation, co-founded by Whittaker and Maya Perlmann, works to give “amal,” the Arabic word for “hope,” to refugees in Jordan by granting them scholarships to nearby universities in Jordan.

When asked what Fairfield students need to know before visiting the exhibition, Rose stated, “I think the work speaks for itself. Knowing the situation of the artists and knowing that their intent is to show what is happening now in Syria is important, but I think that you can be moved by it without doing any homework.”

The name of the exhibition comes from one of the artist’s answers to a student’s question. When asked how he deals with the difficulties of living as a refugee, Mohammed Ali responded, “Sometimes when I feel that I am going to choke, that I am on the verge of collapse, I break the feeling by drawing, and my soul returns back as it was.”

There will be an opening reception on Feb. 10 from 5-7 p.m. in Lukacs Gallery.