New York native Jeff LeBlanc is on tour with his highly anticipated album “Vision,” which will be released on May 12. LeBlanc is a likable, down-to-earth musician who has honed the art of songwriting. The Sirius XM “Singer/Songwriter Discovery of the Year” nominee broke the Top 10 of the iTunes Top 200 Singer/Songwriter Chart – twice. His latest, “My Own Way There” (2013), “is like driving with the top down.” “With Jeff at the wheel, he takes you on 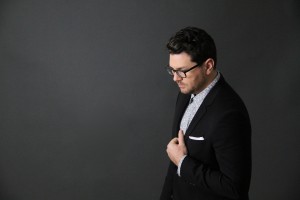 a winding road through a varied landscape of songs and stories,” stated MTV. Its predecessor, “Worth Holding On To,” (2011) climbed to number three on the iTunes chart and both albums began rotation on Sirius XM’s The Coffee House. Now in the spotlight, the Sacred Heart 2008 alumnus began touring with Gavin DeGraw, Chris Isaak, Ingrid Michaelson, Luke Bryan, Lifehouse and David Archuleta. As a self-managed artist, LeBlanc has made great strides since his 2009 debut “Signals” EP. LeBlanc’s music has appeared on MTV series like “Jersey Shore,” “Teen Mom,” “The Real World” and “Keeping Up with the Kardashians.”

The 29 year-old will be headed to Fairfield Theatre Company on Friday, May 1 as part of his album release party – which also includes a stop at Joe’s Pub (New York City) on April 26 and at Club Passim (Cambridge, Mass.) on May 6 . LeBlanc is a regular at StageOne and no stranger to Fairfield’s campus – including his appearance on WVOF last month, where LeBlanc played a track off the new record.

Since then LeBlanc has released a single off of the album “Stumbled,” which is available for those who pre-order “Vision.”

The single recounts the blunders of dating and heartbreak, but is contrasted by LeBlanc’s upbeat groove and catch hook: “I can’t believe it, how quick you broke my heart in two / I can’t believe it how I stumbled over you.”

“Vision” was tracked at Nashville’s Sound Emporium, which has seen artists from Jack Clement and Johnny Cash to Willie Nelson, Taylor Swift and Kenny Chesney. In his artist bio, LeBlanc wrote “Listening to this album feels like catching up with an old friend over a cup of coffee” – a mixture of maturity, intimacy and familiarity. “I was listening to a lot of pop music,” said LeBlanc. “I saw Justin Timberlake live and listened to bands like Michael Jackson which began to influence this record. I started playing simple songs, like ‘Stumbled’ which is only two chords, over drum loops and programming.” All of this translated into a simplistic and relatable song-form.

Based on LeBlanc’s track record, “Vision” marks a new chapter for both the emerging artist and his fans alike. On this brink, what makes LeBlanc’s records so addictive?

It has been narrowed down – a humble feeling and energy behind each hook that captivates and rejuvenates in the ears of the listener; so roll-down those windows and tune in to the “vision” ahead.