The National Basketball Association playoffs are approaching sooner than we think. With only one week left in the regular season, things are beginning to heat up in the playoff race. In the Eastern and Western Conferences there are still teams that have to clinch their playoff spots.

In the Eastern Conference, the Toronto Raptors are looking the strongest going into the playoffs. They are currently the most complete team and don’t have any major injuries. The problem is, they have never been able to win in the playoffs. Season after season, even with a great regular-season record, they continue to fail to make the NBA finals. They have never won an NBA finals as a franchise. The Boston Celtics have the second seed in the East, but all-star guard Kyrie Irving injured his knee a few weeks ago and may not be back for the start of the playoffs. This could prove to be detrimental for the Celtics since he will miss the entire playoff season. If they end up playing a team like the Milwaukee Bucks, then some panic may reside in Celtics fans’ hearts.

The Cleveland Cavaliers were a team that I expected to blow through the rest of the regular season with the trades that they made, but they have actually proved to be inconsistent since the trades. They have been 16-8 since, but many of these wins have come against non-playoff teams. The key factor in the playoffs for this team is LeBron James, he never goes down in the playoffs without a fight and he certainly won’t stop that tendency this year.

Since Irving is injured, the Celtics will have to rely on other scorers to carry the team through the playoffs. Boston and Cleveland will try to make a run out of the East to the NBA Finals. I think that these two teams have the best chance in the Conference, even with some of their weaknesses.

In the Western Conference, it is much harder to predict who will make a finals run since it’s a more stacked Conference than the East. The frontrunners for a deep

playoff run are the Houston Rockets, Portland Blazers and San Antonio Spurs. I left out Golden State because they simply have too many injuries and haven’t shown any team chemistry within the past month and a half. Steph Curry won’t even be back for the first round, so that will prove to be detrimental down the stretch in the playoffs since Curry will be rusty. It wouldn’t surprise me if they lost to a team like Houston or Portland.

Houston currently looks like the best team in the entire NBA and are showing no signs of slowing. I expect them to make it to the finals in the West and and possibly even win it if they don’t have any injuries during the playoffs. James Harden deserves Most Valuable Player as of now and, with Chris Paul on his side, they’re currently unstoppable. 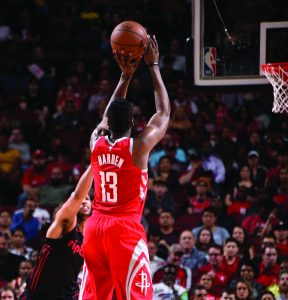 The Spurs’ playoff run relies heavily on if Kawhi Leonard is able to suit up for the playoffs. He is the Spurs’ best player, but has been injured for most of the season. The Spurs can still make a run though because of head coach Gregg Popovich’s ability to coach the team.

The Blazers are also looking really strong coming into the playoffs. Led by Damian Lillard and C.J. McCollum, they combine to be one of the best backcourts in the league. They are currently third place in the West and it wouldn’t surprise me if they made a deep run in the playoffs. We have to see if their big men play as well as their guards down the stretch.

All in all, we are certainly ready for a crazy NBA playoffs, hopefully it will top March Madness. In my opinion, whoever makes it out of the West will win the NBA finals, and as of now, it looks like the Houston Rockets will take home the championship.