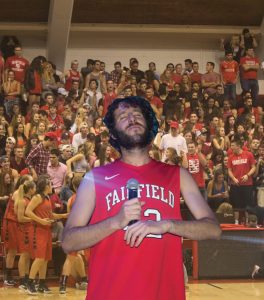 Once the madness from Alumni Hall seemed to settle down, over a thousand students anxiously awaited the night’s final performance, Lil Dicky.

However, before students were able to enjoy the show, they were given the opportunity to grab some food from several different food trucks, including Garden Catering and Colony Grill, found along the Barone Campus Center lawn. As students waited for their food to be served, members of the Fairfield University Student Association helped set up the stage and floor for the night’s main event.

When it was finally time for the show to start, students stormed the court and grabbed the spots where they would remain standing for the remainder of the performance. Once students settled, the lights began to dim and the countdown from 10 began. From the smoke and darkness emerged Dicky with his red No. 42 Fairfield jersey. The moment he stepped onto the stage, the madness from earlier in the night resurrected as students jumped with enthusiasm while he performed his first song of the night, “Professional Rapper.”

Junior Philip Sibert, who was in the audience, expressed his joy following Dicky’s first song, saying, “I knew he was coming out soon. All of a sudden, I heard the music and for him to start off with such an iconic song just got me pumped.”

Following his first song, Dicky introduced himself to the crowd and received a huge roar in response. After performing a few more songs, he decided to take a break by quenching his thirst with some water, the first of many times the rapper interacted with the crowd. He asked them if they were thirsty, and as students clapped and cheered, Dicky responded by dousing all those in front of him with water, catching several students off guard. That was the first of many times that Dicky would grace the crowd with a sea of water.

After getting the crowd riled up, Dicky then got their attention as he called for them to join him in singing the national anthem, a routine he usually adds to his performances.

Halfway through the concert, Dicky whipped out yet another prop — this time a box of Nature Valley Bars. Asking the audience if they were hungry, Dicky flung a variety of granola bars throughout the court. Toward the end, he brought one last prop, a vegetable platter that he scattered around the crowd as if he was in a food fight in a cafeteria.

When asked about the prop throwing by Dicky, FUSA Director of Marketing & Public Relations Nina Poosikian ‘17 stated, “Lil Dicky throwing props was definitely unexpected, but the crowd seemed to love it and that’s all that matters. We put on the events for the students, so if they’re having a good time, we’re happy.”

Before the night was over, Dicky had one last idea in mind in order to end the show with a bang. As he looked over the crowd at Alumni, he asked for one volunteer for his final song “Lemme Freak.” Dicky pulled a girl up on stage with the help of security and offered her a seat. As the song started to play, the two locked eyes and the Philly rapper began his suggestive performance.

Following the performance, Dicky was set to travel down to Miami, Fla. for a couple of more performances.

Dicky said, “Touring is cool, you get to see different parts of the country and the world even, like I’m going to Europe in two weeks.” Dicky commented on what’s next for him saying that he will be “working on more music, I’m just so far away from the next project.” He is looking to drop a new music video soon for his new single, “Pillow Talk.”

Overall, Red Sea Madness featuring Lil Dicky was a huge success, selling over 1,000 tickets and drawing the largest crowd on record for both Red Sea Madness and FUSA-sponsored concerts.

“Overall, it was one of the most attended FUSA concerts in the past few years and was the highest attended Red Sea Madness ever,” said Poosikian. “As an organization, it’s always amazing to see your event do well and see the students enjoying it.”