After five years with the global boy band phenomenon, One Direction, Zayn Malik has attempted to distance himself from his former pop image with his solo debut album, “Mind of Mine,” released on March 25. Created in a typical pop music lab with a 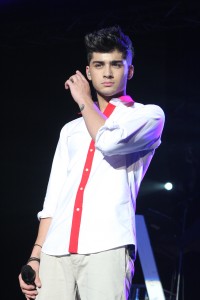 mixture of R&B and hip-hop, “Mind of Mine” looks to break into more mature territory for Malik.

As an artist, Malik appears to be following the same path as Justin Bieber, whose latest album “Purpose” has a similar musical aesthetic. Both albums delve into the new, laidback R&B driven groove that seems to be so popular with artists nowadays. Now why is that? Perhaps it is the idea that such music may be more popular with an older audience, which is exactly what Malik and Bieber are aiming for as they attempt to reinvent themselves.

With a little bit of help from Frank Ocean’s “Channel Orange” producer, James Ho, “Mind of Mine” has brilliantly lush production throughout. For his debut, Malik opts for originality and avoids influences from other genres, a decision that does give the former One Direction singer a new direction, but ultimately removes a sense of variety from the final product.

“Mind of Mine” opens with the chart topping song, “Pillowtalk,” one of the singles released beforehand by RCA records to introduce the world to the new Zayn Malik. With a strong mix of smooth vocals and electronic beats that would not sound out of place in an Usher song, “Pillowtalk” gives listeners a good indicator of what is to come.

The rest of the album goes on to follow a typical theme, one of romance and heartbreak that alludes to Malik’s personal life with tracks like “iT’s YoU” and “BeFoUr.” The former sounds like a meditation on his failed relationship with Perrie Edwards, which ended with Malik severing their engagement. On the track, his voice and the lyrics take the spotlight with a mellow, almost mournful progression working quietly in the background.

This type of sound can be heard consistently throughout the album, as the moody tone remains stagnant for the album’s entirety. For the most part, this approach works because it allows all of the songs to melt into each other and create a cool, sonic atmosphere for listeners. However, it does become somewhat redundant when one can predict how the next song will sound before even listening to it.

“Mind of Mine,” with all of its positives and negatives, is still a fantastic debut for Malik. The album makes for great chill music and hints at even better things to come from the singer. “Mind of Mine” ultimately acts as a great reintroduction into the music scene for the former One Direction star.