One of the biggest conversations in tennis today is the changing tide from the dominance of tennis legends like Roger Federer and Rafael Nadal to the rise of upcoming, next generation players like world No. 4 Alexander Zverev and Australian fan-favorite Nick Kygrios. The Big four, Federer, Nadal, Novak Djokovic and Andy Murray, and Serena Williams on the women’s tour, have dominated the tennis world for the last decade or so. However, if the 2018 Australian Open taught us anything, it’s that while many of these tennis greats are here to stay for a while, several “next gen” players are ready to make their move and dominate at the grand slams as well.

Headlining the tournament was Federer’s enticing victory over 2014 U.S. Open champion Marin Cilic in the men’s singles final, by a score of 6-2, 6-7, 6-3, 3-6, 6-1. In a rematch of last year’s Wimbledon final, Cilic appeared more confident on court this time around, but was still dominated by the grace and expertise of the now 20-time grand slam champion.

Despite the excitement of winning yet another major title, Federer’s victory was highlighted by the fact that it was his 20th grand slam victory. With his Australian Open title, Federer became the first male player to win at least 20 grand slam titles, following female greats Margaret Court, Steffi Graf and Serena Williams, who have already achieved this feat. Additionally, with this title, Federer has now won six Australian Open titles, equalling the record of most titles won “down under,” held by Roy Emerson and Djokovic.

If Federer’s 2017 season, highlighted by Australian Open and Wimbledon titles, cemented him as the greatest tennis player of all time, his 2018 Australian Open title showed the true immortality of the 36-year-old Federer, and left tennis fans wondering how the sport will ever be the same once he retires. 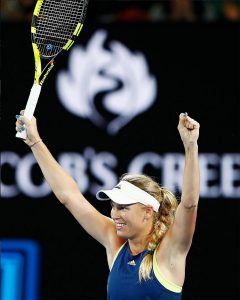 No. 2 Caroline Wozniacki defeated No.1 Simona Halep for her first major title. Photo contributed by AustralianOpen/Instagram

The women’s singles final was nothing short of enticing either, with No. 2 Caroline Wozniacki defeating No. 1 Simona Halep by a score of 7-6, 3-6, 6-4. Neither Wozniacki nor Halep had won a major title prior to this event, but both had suffered heartbreaking losses in major finals. In 2017, Halep lost the Roland Garros final to the surprise young finalist, 20-year-old Jelena Ostapenko – a victory that would’ve cemented the world No. 1 ranking for the Romanian. Wozniacki, on the other hand, made it to the U.S. Open final in 2009 and 2014, losing to Kim Clijsters and Serena Williams, respectively. Prior to her 2018 Australian Open title, Wozniacki had been known as the “greatest female player to never win a grand slam title,” a name she was certainly willing to rid herself of. Wozniacki had held the world No. 1 ranking for two years, in 2010 and 2011, and while she won plenty of titles during this time, none of them were as big as the one she won on Saturday, Jan. 27.

Not only was it exciting to see which female would win their first grand slam title, but the winner of the title would retain the world No. 1 ranking. Thus, with her win, Wozniacki has returned to the No. 1 ranking for the first time since 2011.

Despite long-time favorites taking the men’s and women’s singles titles, several newcomers made great strides at the tournament as well. Most notably was 21-year-old Hyeon Chung, who defeated his idol Djokovic in the Round of 16 and surprise American quarterfinalist Tennys Sandgren, and finally lost to Federer in the semifinals. Despite having to retire from his semifinal match with severe blisters on his hands, Federer noted after the match that he saw great potential in the young athlete – not a bad compliment from the 20-time grand slam champion.

On the women’s side, 15-year-old Marta Kostyuk made a remarkable run to the third round, losing to No. 4 Elina Svitolina handily. Yet, Kostyuk’s run made her the first player born in 2002 to make it this far at a major, leading tennis spectators to believe that we’ll be seeing a lot of this young phenom in years to come. Another young player on the female side that made great progress at the tournament was the unseeded 22-year-old Elise Mertens, who lost to Wozniacki in the semifinals. Mertens is certainly another player to look out for on tour this year, as her big game makes her a threat to all the sport’s top players.

Amid Federer’s top-notch performance at this year’s Australian Open, the rest of the big four didn’t fare quite as well. Murray didn’t compete in the tournament as he’s struggling with an ongoing hip injury. This served as Djokovic’s first tournament back since withdrawing from Wimbledon in July 2017 with an elbow injury, yet he failed to reach the quarterfinals, and Nadal lost to Cilic in the quarterfinals, retiring in the fifth set with an injury of his own. Further, despite the immense successes of No. 3 Grigor Dimitrov and No. 4 Zverev in 2017 that saw them both break into the top five for the first time, neither player was able to make it to the semifinals, with Zverev losing to Chung in the third round and Dimitrov losing to rising British phenom Kyle Edmund in the quarterfinals.

Djokovic’s return to grand slam play wasn’t the only comeback of the Australian Open; former world No. 1 Angelique Kerber, who won the Australian Open and U.S. Open in 2016 but faced a rough sophomore slump in 2017, made a remarkable run to the semifinals, losing to Halep in a tight three-set match. Her progress at the tournament seems to suggest that Kerber will be a notable force on tour in 2018.

If this year’s Australian Open has shown us anything of what’s to come in 2018, it’s that while the dominance of the big four is still imminent, “next gen” players will continue to make a name for themselves, maybe even taking home a grand slam title for themselves.