Hoping to bring an exciting aspect to Fairfield and brighten up campus is the new art club, founded by club President Bronwyn Kelly ‘19. Other board members include Vice President Liza Giangrande ‘17, treasurer Mike Spillane ‘19 and secretary John Laske ‘19. The club’s first major project that will hopefully brighten up some of the construction in the Barone Campus Center is a large mural that will be hung on the white construction wall outside of the Oak Room. On Friday, April 21 and Saturday, April 22 from 10 a.m. to 5 p.m., the art club will host a mural making event outside of the Oak Room. Kelly explained that all students, regardless of major or art expertise, are welcome and encouraged to participate in the creation of this temporary mural that will be on display until the end of the school year.

The mural will consist of large, capitalized letters that spell out “Fairfield.” Within each letter, students can create images that represent a certain theme. For example, the theme for “I” is inclusive and the theme for “D” is diversity — words that represent the Fairfield community. Beneath these letters will be a graphic stag, a stag that’s different from what the Fairfield community has seen in the past, and unlike the one that can be viewed on the Fairfield geofilter on Snapchat. 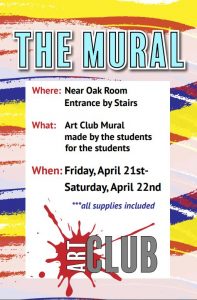 Even though art club has only existed for about a month, it is already making a big impression on campus. According to Kelly, during the spring activities fair, approximately 90 students signed up to be a part of the art club. Kicking off their appearance on campus, the club held their first official meeting on Feb. 23 in the Barone Campus Center at 8:30 p.m. Having about 15 students attend weekly meetings, the art club has been deemed successful and only hopes to continue growing.

Kelly explained that the club has the freedom to complete projects and activities that members want to do.

“Even though I’m running art club, I wanted to ask students what they wanted to take away from art club so that they would want to come back,” said Kelly. “Each week we use a bunch of different mediums such as graphite pencils, colored pencils, acrylic paint and gouache. We also decided to create a theme so that at the end of the year we could put up an exhibit. This year we chose the theme of identity, but next year we’ll vote on something else.”

Members of art club appreciate Kelly’s decision to include their thoughts and opinions when deciding what to do during each meeting. Sophomore Alyssa Vigorito commented on the large amount of projects that Kelly has been able to accomplish in such a short amount of time.

“The mural is one of the biggest projects this semester, but further down the road I hope we could get the chance to hang up all of our artwork from this semester in a gallery in Loyola. Though, Bronwyn is very dedicated to the club, and is one of the most hardworking and determined people I know, so I don’t doubt she can accomplish that and more,” said Vigorito.

Another unique quality about the art club is that all students are welcomed. From students who have minimal art exposure, to students who are art experts, the club as something to offer for all levels.

“It’s really funny because in the club, we’ll have people who are just going at it and are drawing things out of their own head, and then some people need help and we [the executive board] go around and help them draw,” said Kelly.

Vigorito is an English major and she explained her passion for the new club. “I find that I enjoy art club most because it allows me to set out specific times to work on pieces I would otherwise set aside in exchange for other activities. Also, the people who attend each week are friendly and creative, and being in the same room together has brought out the best in all of us,” said Vigorito.

Inclusivity is key for the art club, and because of this, the club anticipates more students joining at the start of next year. The club also has a variety of projects and plans for the future. For example, they have already been in touch with Matt Dinnan, the director of conference and event management at Fairfield and together they’ve planned to paint murals in the BCC conference rooms at the start of next semester.

“I just want students to know that literally anyone can come and join art club,” said Kelly. “We have a lot of cool projects on the horizon and I hope that students keep an eye out for us.”