The first spoken words of “Deadpool” were nothing short of the humor that was expected. “I know right? You’re probably thinking ‘Whose balls did I have to fondle to get my very own movie’? I can’t tell you his name, but it rhymes with ‘pullverine.’ And lemme tell you, he’s got a nice pair of smooth criminals down under.”

These opening lines spoken by Deadpool, played by Ryan Reynolds, perfectly sum up the wisecracking nature of Wade Wilson that comic book fans were hoping a film would emulate.

When it was ann 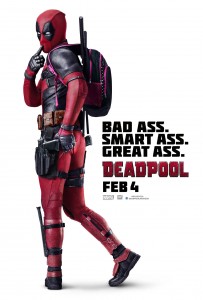 ounced that the Marvel anti-hero Deadpool was to be given his own movie, critics were quick to dismiss the movie’s potential success due to the mutant’s comical, raunchy, fourth-wall breaking mannerisms. Knowing that a movie starring Deadpool would need an R-rating in order to properly conceptualize his personality, its box office predictions were downplayed.

Opening on Feb. 12, “Deadpool” has done just the opposite of that, receiving rave reviews and raking in $132.2 million on its opening weekend, according to Forbes. This is the record for highest box office on President’s Day weekend, edging out last year’s “Fifty Shades of Grey.”

Now, as far as the movie itself goes, the “Merc with a Mouth” appealed in a way that attracted both comic book fans and common moviegoers. Reynolds’ rendition of the chimichanga-loving X-Man was spot-on, vastly improving the job he did playing the same character in “X-Men Origins: Wolverine.”

Deadpool’s fourth-wall breaks are frequent, and his wisecracks conveniently timed. He often cites the rest of the X-Men universe, in a hilarious way that jerks at its fans. For example, in one scene where X-Man Colossus, played by Stefan Kapičić, tries to drag Deadpool to the X-Mansion to see Professor X, he replies with “McAvoy or Stewart?,” referencing the two actors who have played the character.

His wisecracks come across at quirky times, often when Deadpool is in the middle of slicing up adversaries or jumping around gunfire. While in the middle of a flipping car, he asks if he left the stove on at his house and makes sexual banter in reference to his enemies and why they should be wearing brown pants in case they have an accident.

There’s plenty of crass humor, but Deadpool is funniest when he is placed in weird, more-humanlike situations, like taking a cab, doing his laundry or relaxing at home while his blind elderly roommate builds IKEA furniture.

As playful and comical as these come across, however, “Deadpool” is mired by a script that tries too hard to be funny. The attempts at satire become repetitive about midway through the film, and seem blatantly implied from there on. Alas, this prevents the film from being taken seriously. Just as a moment may happen between Deadpool and another character that would add intimacy to the movie, the anti-hero resorts to a cheap joke to maintain the mundane.

Additionally, having been released on the same weekend as Valentine’s Day, “Deadpool” becomes a skewed romantic comedy that never gets meaningful enough. In classic superhero movie fashion, Vanessa Carlysle, played by Morena Baccarin, gets taken away by the same man who gave Wilson his superhero abilities, Ajax, played by Ed Skrein. Though it is clear that Deadpool’s mission is to rescue the damsel in distress with the help of X-Men Colossus and Negasonic Teenage Warhead, played by Brianna Hildebrand, he remains coy on the subject with the same old sex jokes to shamelessly break the tension.

In its totality, “Deadpool” is incredibly entertaining and provides an interesting twist on the common superhero movie. The crass jokes work, but scatterbrain the viewer, preventing any intimacy from occurring with its characters. A sequel has already been confirmed with Reynolds reprising the role, and is sure to deliver more raunchy comedy.