Marvel Comics released a new comic about everyone’s favorite captain last Wednesday, Sept. 16, appeasing many eager fans who have been awaiting its debut since it was announced in June.

“Captain America: White” is a new series that focuses on Steve Rogers’ memories of World War II and opens immediately after Rogers awakens from being frozen for 70 years.

He immediately flees from some of the Avengers who are present for his awakening and is overcome by flashbacks of the war and his best friend Bucky Barnes.

One of the best aspects of the comic is the focus on the friendship between Rogers and Barnes.

Anyone who has seen the Marvel films knows that this was not expanded on quite as much as it should have been in “Captain America: The First Avenger.”

In this comic, Rogers mourns the loss of Barnes in the present and reminisces about their friendship in the past.

These moments are both heartwarming and poignant.

However, not every moment between Barnes and Rogers is sugarcoated, which gave the story an element of realism. 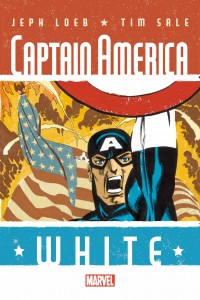 For example, Barnes and Rogers argue in one scene, and Rogers heartbreakingly reminisces about this much later.

It is moments like these that made the comic beautiful and down-to-earth.

Overall, the comic is entertaining and a lot of fun to read. It also dares to go dark at times, but still has a lighthearted feel throughout.

What makes this comic even more enjoyable is the vintage style of drawing that is reminiscent of Jack Kirby’s art when he drew for Marvel.

This gave the comic a classic feel to it, while retaining a modern comedic spin.

Although the comic was very well-done, the ending could have been a lot stronger.

The themes of grief and failure could have been emphasized a lot more if the final scene of the comic was Barnes’ death, rather than including an additional scene after.

Instead, with a flashback as the closing panels, the ending of what had been a very strong and exciting comic was weak and took away from the tragedy that was Barnes’ death.

Nevertheless, this comic certainly made me want to read more about the relationship between Rogers and Barnes and how this will translate into Rogers’ reentry into the modern world.