“A new fantastic point of view.” That’s exactly what “We Love Disney” is — a reimagination of many classic Disney songs by various pop musicians. The artists featured range from contemporary pop icons such as Ne-Yo and Fall Out Boy to older pop artists like Gwen Stefani. 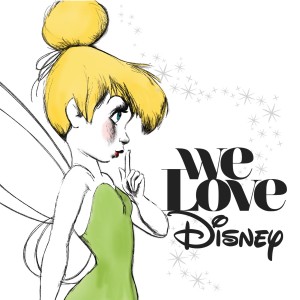 Fifteen songs were chosen for the album spanning the long history of Disney, fourteen songs coming from various movies and one, “It’s a Small World,” from one of the main attractions at the various Disney parks. The 14 other songs come from many of Disney’s popular musical films. Most of the songs used on the album are popular songs from the most well-known Disney films. This includes “Let It Go” from “Frozen,” “Friend Like Me” and “A Whole New World” from “Aladdin” and “Can You Feel the Love Tonight,” from The Lion King. The album also includes lesser known songs from less popular movies such as “In a World of My Own” from “Alice in Wonderland” and “It’s Not Easy Being Green” from “The Muppet Show.” The inclusion of so many pop artists was probably to give the album more press and a better chance to succeed. The combination of popular Disney songs and the collective reach of each artist led to the success of the album, peaking at No. 8 on the Billboard 200 this week. By covering these songs, these modern artists bring songs from the listeners’ pasts into the future, giving the listeners a good sense of nostalgia when they listen to these songs.

Many of the tracks are the artists’ take on the songs breathes a new life into them. In the opening track, “Friend Like Me,” Ne-Yo adds his R&B flair to the already outlandish vocals provided by Robin Williams in “Aladdin.”

Though the album does well in adapting these songs to the artists’ styles, not everyone was perfect. While the country influence helps in making “Let It Go” a newer version of itself, the complete change of “A Spoonful of Sugar” to a country tune doesn’t do justice to Julie Andrew’s original version. Ariana Grande’s voice in “Zero to Hero” lacks the soul that the Muses had on the song from Hercules. The background choir has more soul than she does for most of the song.

This album was released after the successes of two other compilations of Disney songs by pop artists in France and Australia released in 2013 and 2014 respectively, both of which were also released as part of the “We Love Disney” series. This type of compilation continues the idea of the Disneymania compilations of 2002 to 2010 of having mainstream artists cover Disney songs.  The French album was the most successful compared to the others on its respective chart, peaking at No. 2 on the French album chart, while the Australian version came in at No. 66 on the Australian Albums chart.

Altogether, “We Love Disney” is a strong album that succeeds in putting new twists on classic songs from our childhoods.