The zoo’s on the loose in ”Zootopia,” the newest Disney animated film released on March 4. The story follows police officer bunny Judy Hopps (Ginnifer Goodwin) as she investigates the disappearances of several mammals in the animal run metropolis Zootopia with her fox friend Nick Wilde (Jason Bateman). Within the main story of the investigation, “Zootopia” explores the relationship between Hopps and Wilde and the prejudice and stereotypes that are placed upon them and the animals living in the city.

The film mainly takes place in two settings — Hopps’ hometown of Bunnyborrow and the many environments of Zootopia. The settings in Zootopia were one of the best parts of the movie. Only in a town devoted to the coexistence of animals could animators 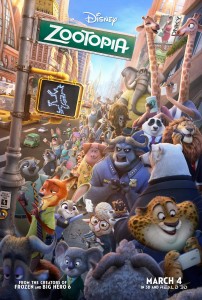 create a city with sections like Tundratown next to Sahara Square and a Rainforest District a car ride away. The different boroughs of Zootopia are excellently designed, especially the town center, Savannah Central with its many buildings and large, dense population and the Rainforest District with all the detailed plant life present.

One of the biggest themes of the film deals with the prejudice that is found throughout the city of Zootopia. This is exhibited through the underlying mistrust of predators by prey and vice versa. This prejudice even infects the friendship between Hopps and Wilde at one point in the movie. The city’s prejudice comes to a head when the predators (who are outnumbered 10 to 1 by prey) start to be discriminated against by the prey majority.

The best jokes in the movie were the references made to popular culture and all the puns that were made of contemporary companies. Two of the easiest-to-catch references were the Mr. Big the Godfather-like crime boss shrew and the DMV (Department of Mammal Vehicles in the film) run entirely by the sloths. Even though the Mr. Bigs-Godfather sloth-DMV references would go over the younger children’s heads, the older viewers will understand. The company puns that I thought were the funniest were Zuber and Hoof Locker, Uber and Foot Locker respectively.

There were a few allusions in the form of jokes to Disney’s previous movies. The pirated DVD sales weasel was named Duke Weaselton, ala “Frozen’s” Duke of Weselton voiced by the same actor, Alan Tudyk. It was a nice nod to those who have seen both movies. Some of the DVDs that he sold included Pig Hero 6 (“Big Hero 6”) and Wreck-It Rhino (“Wreck-It Ralph”).