Chris Belden’s opportunity to reissue his novel “Shriver” was an eye opening experience for him.  “It was a chance for me to see what I did wrong the first time,” he said.

Belden, a graduate of Fairfield’s MFA creative writing program, not only brought an inspiring presentation about the art of the novel to Fairfield University’s Downtown Bookstore, he also created an entertaining and colorful event. Belden read sections of his books aloud, played the guitar and sang original songs for the intimate group of 16 on Tuesday, Nov. 3. 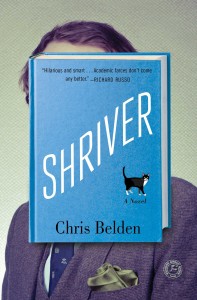 “Shriver” is a story of a man who is invited to a writing conference under a false identity and is mistaken for another author.  He is then thrown into a whirlwind of events full of unfamiliar people. Belden is also the author of “Carry-on” and the story collection “The Floating Lady of Lake Tawaba.”

In the beginning of Belden’s writing career he was invited to attend a prestigious writing conference in North Dakota. Previous authors who’ve attended this conference include Truman Capote (“In Cold Blood”) and Sherman Alexie (“The Absolutely True Diary of a Part-Time Indian”). As Belden spoke to students, authors and various poets at the conference, he said that he began to feel like an imposter. He knew that he had not written or published as much work as others in attendance and wondered if he ever would reach their level of craft.

“I tend to write out of my neurotic anxiety feelings … I had to find a way out of it,” Belden told the engaged audience. With the experience of those mixed emotions and the creeping feeling of defeat from the conference, Belden’s novel “Shriver” was created.

Fairfield students, former classmates, fellow professors and fans of his writing listened to Belden as he read from the first chapter of “Shriver.” Senior Allison Wright attended Belden’s presentation for her news writing class. “Chris was entertaining, enthusiastic and passionate which helped me hold my interest,” Wright said.

Belden noted that all of the characters in his novel contain some characteristic of Belden himself, and most ideas for the story came from Belden’s real life experiences. He writes whenever he can and finds that when he has more time to write, he usually writes less.

Not only is Belden a published novelist, he also plays the guitar and performs original music. He presented two pieces for the bookstore audience and entertained the crowd with each composition. His first song was entitled “Marion Ettlinger,” which described a famous photographer of the same name who took pictures of authors. The song describes the longing that Belden experienced as he hoped that Ettlinger would snap his picture. The second piece was a satirical song written about former Vice President Dick Cheney entitled “Dick Cheney’s Folk Song.”

Belden has won the Fairfield/New Rivers Book Prize. In 2013, his essay “Inside Words: How to Teach Writing in Prison” received the Bechtel Prize from Teachers & Writers Collaborative.

After working through the initial process and editorial comments that came with the reissue of “Shriver,” Belden admitted that overall he thoroughly enjoyed the experience and is grateful for the opportunity to improve his novel for a new generation of readers.

Belden is currently working on new pieces and hopes to write even more in the future. Belden noted that he was grateful for his time at Fairfield. He pointed out, however, that after graduation he continued to learn even more about writing: “I’ve learned about writing, the business of writing and the community of writing,” he concluded.