The Fairfield University Downtown Bookstore welcomed back an alum this past Thursday, Sept. 24, to speak to the Fairfield community about her newly released book that chronicles the story of her, her daughter and the dog that changed their lives.

“Elle and Coach: Diabetes, the Fight for My Daughter’s Life and the Dog who Changed Everything,” is the first book for Stefany Shaheen ‘97, in which she explores her family’s life after her oldest daughter’s diagnosis of Type I diabetes in late 2007 and their experiences after receiving a service dog, Coach, two and a half years ago. 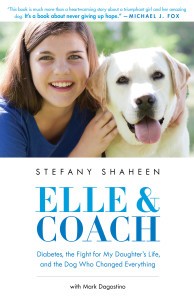 Coach is a yellow Labrador who was trained for 2,000 hours to smell changes in blood sugar levels, a job he was bred for. Elle and her father flew to Kansas after an 18-month wait to pick him up. While they were asleep, Coach pushed Elle’s backpack off of a desk to get their attention and test Elle, showing that she was low.

This solidified Elle’s love and trust in Coach. Because of Coach, Shaheen can act more like Elle’s mom and less like her nurse since Coach goes everywhere that Elle does. He’s even going to come with her to college in two years.

At the bookstore, Shaheen read a few excerpts from her book that dealt with the troubles they faced immediately after Elle’s diagnosis and how they adjusted as a family, including with Coach.

One of the main struggles was the constant insulin injections that Elle needed after every meal and before bed. At times she was injected up to eight times a day.

Before and after writing this book, Shaheen and Elle campaigned and advocated for people affected by diabetes. In the past, they advocated at the White House for diabetes research, even meeting President Obama. Shaheen said that proceeds from the book would go to diabetes research.

Currently, Shaheen is on the Board of Trustees of the Joslin Diabetes Center, one of the largest diabetes research centers in the world, and is working on a scholarship to help families pay for service dogs like Coach.