This week, we are featuring Dr. Jason Gaines, a lecturer of religious studies. Gaines specializes in Judaic studies and the Hebrew Bible and is currently teaching three sections of RS 101: Peoples of the Book, Sacred Texts, and Their Communities. Aside from the courses he teaches at Fairfield, he is also a visiting lecturer of religious studies at the College of the Holy Cross. 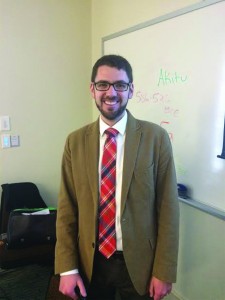 Gaines, unbeknownst to most, is an avid listener of musical theatre, specifically of the recent critically-praised Broadway musical “Hamilton.” When asked why he enjoys songs from musical theatre, he responded saying he “likes the story telling” involved in musical theatre, calling it “modern poetry.”

“I really enjoy musical theater because song lyrics matter a lot to me. My main academic field of study is ancient Hebrew poetry, like in the book of Psalms. The words are everything,” said Gaines. “In a lot of pop and rock songs, the individual words don’t even really matter. But in musical theater, it’s all about the lyrics.”

“One Second and a Million Miles,” The Bridges of Madison County (OBCR)

Check out Gaines’ playlist on The Mirror’s Spotify.

Do you want to be featured in this section? Please email a list of 5-7 songs that you currently enjoy and also a picture that we can use for the column to vine@fairfieldmirror.com.